Lapointe: When a Pandemic Hit Detroit in 1918, It Was a Very Different Place 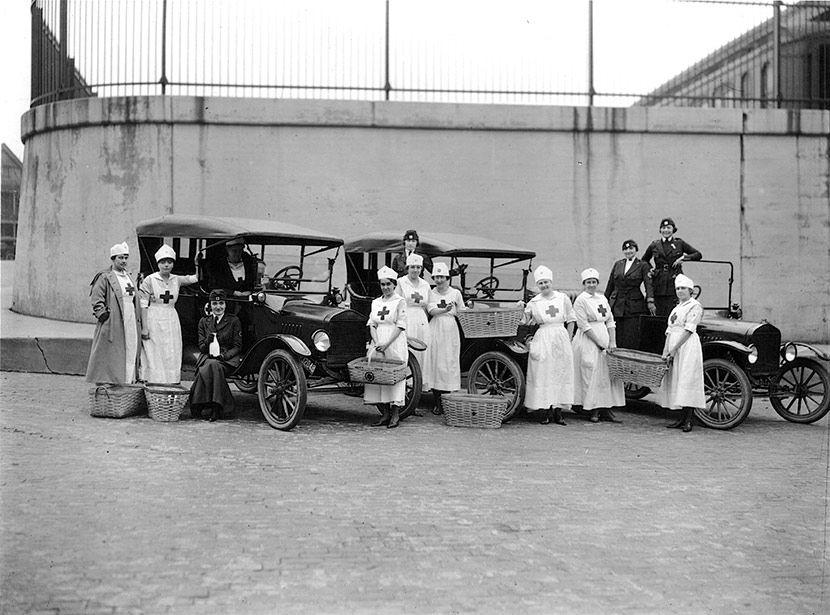 During the global influenza pandemic in October of 1918, Detroit eventually and reluctantly shut down its public schools.

The health commissioner – who opposed the move at first – urged thousands of teachers to visit private homes to survey the spread of the so-called “Spanish Flu.”

In essence, teachers were told to risk death to report.

“Today, that would not stand,” said Dr. Alex Navarro, a University of Michigan historian who has studied the health crisis of more than one century ago. “They may have grumbled, but it was World War I and there was an abiding sense of patriotism.”

History doesn’t always repeat, but sometimes it echoes. Many of the debates from back then are heard again today during the current corona virus crisis that – so far -- has killed 760 people in Wayne County, more than 1,600 in Michigan, more than 22,000 in the United States and more than 110,000 across the world. Mortality was high in people younger than 5 years old, 20-40 years old, and 65 years and older, according to the Center For Disease Control.

A century ago, that pandemic arrived in four “waves” and the middle two were the worst for Detroit. The first passed almost without notice in the spring.

Overall, nearly 30,000 cases were reported in the Motor City in those two time spans and Navarro suspects the true figure was much higher.

“We did not know in 1918 that this was caused by a virus,” Navarro said from the Center for the History of Medicine in Ann Arbor. “They thought it was a bacterial infection. They were flying a little bit blindly.”

More than a century ago, Detroit’s citizens and civic leaders debated:

Should Detroit close houses of worship and other places of public gathering? Should public transit be suspended? What about the bars and restaurants? Should the stores stay open? 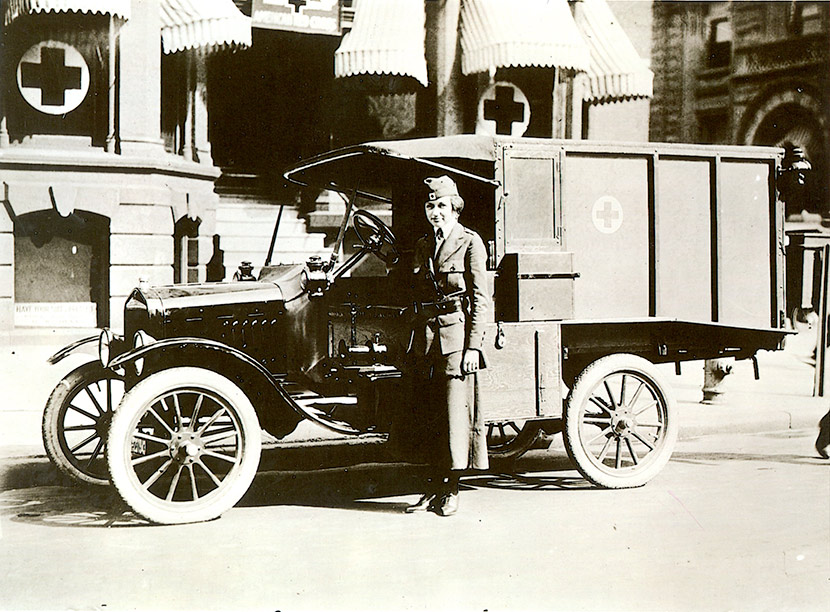 Motor Corps ambulance driver from the Detroit chapter of the Red Cross.

According to research at U-M by Navarro’s team, Detroit Health Commissioner James W. Inches opposed the closing public places to keep people from interacting. Those orders had to come from Lansing.

“He ultimately did not believe that the closures worked,” Navarro said. “Inches really believed that the main threat was from military and that the way to control the epidemic would be to control the number of military personnel moving in and out of the city.”

In the “Influenza Encyclopedia, the American Influenza Epidemic of 1918-1919,” which is available online, Navarro wrote that Inches maintained that the closure order in Detroit hurt business interests and caused panic.

The earliest cases in Detroit were thought to be spread by sailors visiting from a training station at River Rouge and possibly the doughboys from Camp Custer near Battle Creek. They were preparing to go to Europe to fight in the “war to end all wars.”

Although theatres and dance halls and most other places eventually closed for much of October, exuberant Detroiters gathered in large groups outdoors at least twice after the epidemic temporarily receded in November.

First, when the “Great War” ended on Nov. 11, 1918, thousands of Detroiter massed together downtown at Campus Martius. Later in the month, big crowds formed again for a Thanksgiving Day parade downtown.

Those gatherings might have seeded the next wave of influenza that took hold in the winter.

Detroit was a much different place then -- growing, sprawling and optimistic with the surging of the nascent automobile industry.

With the residential surge, Detroit suddenly was the fourth-largest U.S. city in the nation, behind only New York, Chicago and Philadelphia.

Many newcomers sought war work after some auto plants switched over, as they did to a greater extent during World War II. The Lincoln Motor Co. built “Liberty” aircraft engines for early fighter planes.

From within the U.S., white and black people moved up from the Southern States. Some migrants arrived at the Michigan Central train depot, which had recently opened.

In his 2012 book “Detroit,” author Scott Martelle recounted that by 1920, “the number of foreign-born alone had nearly tripled in twenty years, and they were settling into Poletown, Corktown, Germantown and other neighborhoods based on ethnicity. Poles were the largest single ethnic group.”

Train stations showed signs urging riders to “Learn English and Get Better Pay.” But a bill came due for cities like Detroit after America’s transformation from a small-town and rural culture to a densely populated urban culture.

According to Dr. Nancy Tomes, who studied the 1918 pandemic for the State University of New York at Stony Brook, this “mass society” in cities like Detroit was a perfect breeding environment for a viral spread. 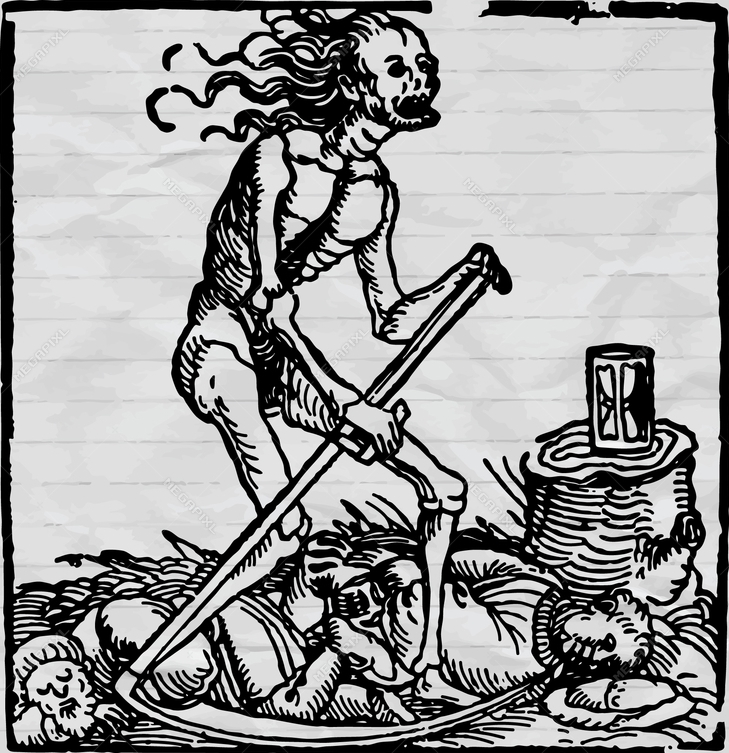 “The scale and scope of public gathering places increased dramatically between 1890 and 1918,” she wrote. “The second industrial revolution directly or indirectly  led to a vastly expanded public school system, huge factories and office buildings, extensive public entertainments (amusement parks, nickelodeons, dance halls), and last but not least, mass transportation systems that connected all the elements together. By the early 1900s, the interlinking of public spaces created a vast highway along which the deadly germs could quickly travel.”

Without specifically mentioning the resistance of Detroit, Tomes charged that “some communities accepted the necessity for social-distancing measures and others did not.” But Tomes wrote that Dr. Inches in Detroit didn’t even like the idea of face masks to cover the nose and mouth.

“These masks are worthless,” she quotes Inches as saying. “A mosquito could jump through them.”

Many accounts of the deaths in that period cite blood flowing from the ears, eyes and noses of victims, whose skin would turn black or blue due to oxygen deprivation. Unlike the current virus, the Spanish flu preyed more on young people.

From a 1925 article in the American Journal of Public Health. Tomes quoted reflections on the pandemic from the prominent public health scientist Edwin O. Jordan: “This is incomparably the worst catastrophe of the sort that has visited the human race since the Black Death of the Middle Ages.”

By the summer of 1919, the flu pandemic came to an end. Those that were infected either died or developed immunity, according to History.com.

In total, the plague of 1918-20 took an estimated 50 million lives worldwide and at least 675,000 in the United States. Among victims were the high and mighty.

Two of them were hardnosed Detroit industrialists John and Horace Dodge, brothers from Niles and early automakers who were giving Henry Ford competition for market leadership.

On a trip to New York for the annual auto show in 1920, both Dodge brothers took sick with the flu. John died on Jan. 14 in his suite at the Ritz-Carlton in Manhattan.

Horace recovered but died in Florida on Dec. 12, 1920, from -- it was said -- heartbreak over his brother’s death and cirrhosis of the liver.

Both are in Detroit’s Woodlawn Cemetery in the family’s granite mausoleum, done in the Egyptian Revival style, with a bronze door guarded by two stone sphinxes. Among decorations above the door are a pair of coiled cobras.