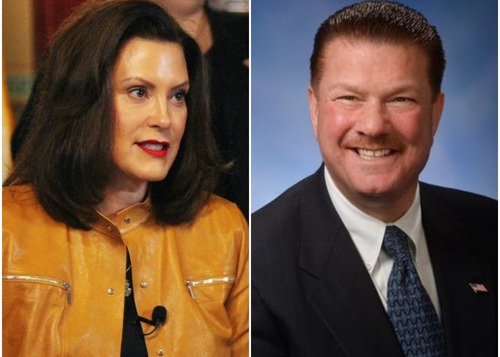 "This is not political, everyone," says Republican Pete Lucido as he urges residents to call police to report Covid deaths in nursing homes.

But the Republican on Monday joined a growing group of partisans in pushing for the investigation of the Democratic governor following the revelation that her New York counterpart, Gov. Andrew Cuomo, vastly undercounted nursing home deaths after relying on a similar policy critics say worsened the situation.

Lucido tells WXYZ he'll even bring charges himself if he finds wrongdoing. In a Monday interview with the station, he indicated he was pursuing his own investigation after urging the Michigan Attorney General's Office and feds to step in, and encouraged residents who lost a loved one in a nursing home to gather information about the death from the facility, then report it to police. This would enable him to get information he says he's not entitled to under HIPPA, a federal health privacy law.

Lucido is asking people to go back to the nursing homes and gather the vital information surrounding deaths and take it to local police to file a wrongful death report. He will be meeting with Macomb County Police to instruct them on how to process and verify the information and bring it to his office.

“Why did my mom or why did my dad, brother, sister, or aunt die? Was it because of the policy by bringing in COVID-infected patients that spread to my mom that killed my mother?” Lucido said.

Lucido said he has requested Michigan Attorney General Dana Nessel and federal authorities investigate the state's nursing home deaths, which composed about a third of all Covid fatalities in the state by late summer. Last week, the majority of Republicans in the Michigan House sent a formal letter to the Department of Justice seeking the same.

Nessel, a Democrat, has been noncommital about an investigation, telling WDIV on Monday that her office would look into the requests.

“I think oftentimes it is appropriate for the office to investigate. But not just when you say, ‘We don’t like what this policy is,’” Nessel said.

But Nessel's New York counterpart, Letitia James, also a Democrat, launched a wideranging probe into that state's Covid response in nursing homes, leading to the discovery that deaths were undercounted by as much as 50 percent. Nessel's office did not immediately respond when asked why it's taken a different approach.

Whitmer and Cuomo both relied on policies that required nursing homes to re-admit residents still recovering from COVID-19, and were among four Democratic governors asked for infection data by the feds in August.

Whitmer's April 15 order required nursing homes to readmit seniors who had been treated for the virus, but only if the facilities had set up dedicated isolation units and had appropriate personal protection equipment, which was in short supply across the country in March and April.

Though much of the response has been partisan in Michigan, at one point, both Democrats and Republicans were on board for change. In June, lawmakers passed bipartisan legislation that would have created separate, Covid-only facilities to house infected nursing home residents. The legislation was sponsored by then Sen. Lucido, who left office amid allegations of sexual harrasment.

Whitmer vetoed the bill, saying her decision was based on "the false premise that isolation units created within existing facilities are somehow insufficient to protect seniors." She characterized the proposal as a "political game."

Whitmer defended her policy in her statement to WXYZ Monday:

The administration’s policies carefully tracked CDC guidance on nursing homes, and we prioritized testing of nursing home residents and staff to save lives. Early in the pandemic, the state acted swiftly to create a network of regional hubs with isolation units and adequate PPE to prevent the spread of COVID-19 within a facility.

As calls for an independent investigation mount, Whitmer has been criticized as releasing insufficient data on deaths in the homes.

The centers for Medicaid, Medicare and the AARP have urged more transparency, WDIV reported.

Deadline Detroit columnist Charlie LeDuff has meanwhile filed suit against Whitmer for her office's failure to release information under the Freedom of Information Act. LeDuff is receiving pro bono legal aid from the right-leaning Mackinac Policy Center and announced the move on Fox News.