A massive lake sturgeon, a dinosaur-looking fish that is probably the oldest species living in North American freshwater lakes, was hauled out of the Detroit River Thursday by U.S. Fish & Wildlife researchers. 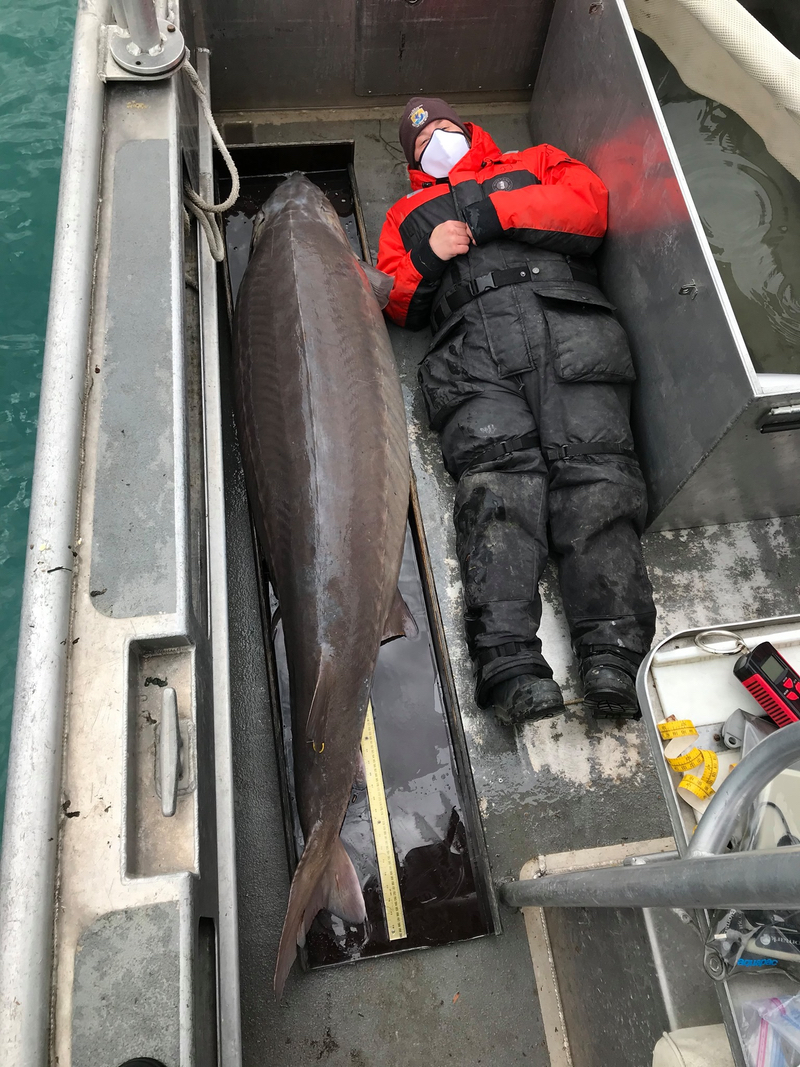 The lunker gal -- and she was a gal -- tipped the scales at 240 pounds, measured 6 feet 10 inches nose to tail, and nearly four feet around at her midsection. (Or roughly the same as the 45th president, but taller, if she could stand up.) The fish was photographed and released, and the picture of her with a Fish & Wildlife staffer lying alongside for scale, went locally viral Friday.

F&W put her in context on its Facebook page:

Based on its girth and size, it is assumed to be a female and that she has been roaming our waters over 100 years. So, she likely hatched in the Detroit River around 1920 when Detroit became the 4th largest city in America.

Think of everything she's seen, or could have seen, from her watery home: Bootleggers' trucks laden with Canadian whiskey, settling on the bottom after falling through the ice. Guns too many to number splashing through the surface, fresh from a felony. Maybe some engagement rings, accompanied by sadder-but-wiser tears. Cremains.

Not that she recognized any as such. The piscine brain is not a human's. As Richard Dreyfuss said of the Great White shark in "Jaws:" "It eats, it swims, it makes little sharks," or sturgeon, in this case.

The fish's range spans North America from the Hudson Bay to Mississippi River. This fish was once an abundant species in the ecosystems of the Great Lakes, but overharvesting has decreased its numbers.

Sturgeon are bottom feeders, eating crayfish, snails, clams, leeches and other small invertebrates. That she survived a century feasting on spectacularly polluted Detroit River salamanders is a miracle in itself.

James David Dickson got an interview with the staffer in the picture:

Jennifer Johnson has seen plenty of massive sturgeon during the six years she has spent working with the U.S. Fish and Wildlife Service surveying the species in lakes and rivers around Michigan.

But the fish she and her team of researchers hauled in Thursday from the Detroit River near Grosse Ile was unlike anything she'd encountered.

"Normally when a fish goes by, we call, 'Fish! Fish!" the 37-year-old Gibraltar resident said Friday. "This time when the shadow went by and I saw it, I shouted, 'Fish! Big fish!"

The lunker was tagged in case she's ever recaptured. Let's hope, when she dies, it'll be from old age.