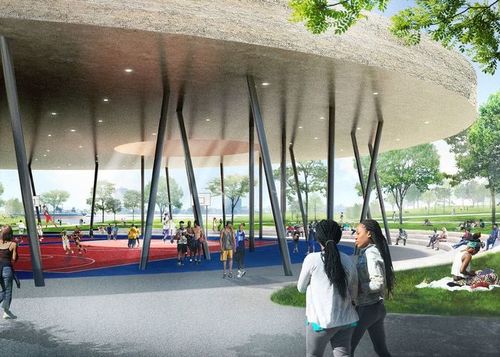 William Davidson, the former Pistons owner who we hold dear to our hearts because he was the last Detroit team owner to build a sports complex without public incentives, will have a sport house built in his name along the Detroit Riverfront — an anchor of the coming Ralph C. Wilson Jr. Centennial Park.

The sport house/pavilion portion of the west riverfront development is designed by the same architect as the National Museum of African American History and Culture in Washington. Crain's reports the late Davidson's foundation, which is also funding a separate public development on the eastern riverfront, donated $11 million to Centennial Park's completion.

Davidson believed sports was a way to bring people together, (Darin McKeever, president and CEO of the William Davidson Foundation) said.

In a fitting tribute, the Sport House will feature two basketball courts and a permanent raised canopy with skylights to provide flexible space for year-round use. It will be designed to accommodate activities like rollerskating, soccer and kickball games and host other structures during the winter for programs, said Mark Wallace, president and CEO of the Detroit Riverfront Conservancy.

The park is due to be complete in spring and the new sport house/pavilion in 2023. Its naming will be celebrated at a conservancy fundraiser this Friday and at the West Riverfront Block Party on Saturday.