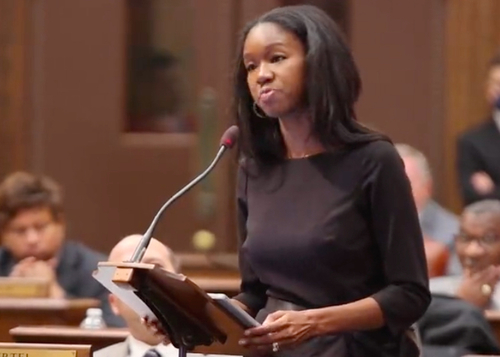 "When we don’t understand our history, we are doomed to repeat it," said Rep. Kyra Bolden.

If you're politically checked out and/or fortunate enough to be white, you may have missed that the latest frontier of the right wing's culture war made it to the Michigan House floor this week.

On Tuesday, Republicans passed a bill to ban public school curriculum promoting "race or gender stereotyping" — or what many inaccurately refer to as "critical race theory" for shorthand.

Democrats abstained from the 55-0 vote, but still put up a fight. Likely the most powerful argument against the bill came from Southfield Rep. Kyra Bolden, a Black Democrat, who drew from her own family history to highlight its potential consequences.

Speaking from the House floor, the second-term rep shared that her great-grandfather was lynched and castrated for shopping at a white-owned store in 1939 as an example of a story she said the bill could leave untold in schools.

Full video of my Floor Speech. Thank you @MariManoogian

"Think about it Mr. Speaker, the ramifications that it had on my family and millions of families in America. The trauma, the absence of a father for my grandmother, the economic toll it took on my family for generations.

"When we don’t understand our history, we are doomed to repeat it and, respectfully, this is not and should not be about your feelings. We are not going back."

More information about Bolden's great-grandfather, Jesse Lee Bond, is available via the nonprofit The Lynching Sites Project of Memphis. He was killed in Tennessee.