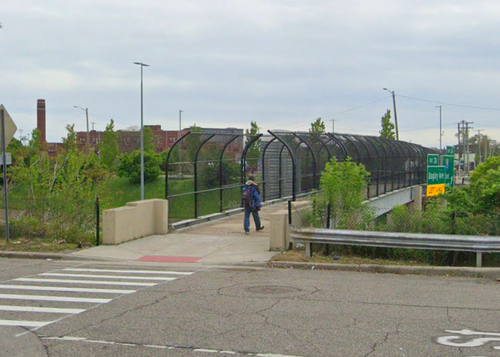 A man fell through the Spruce Street bridge over the Lodge in May.

The Michigan Department of Transportation is revisiting its pedestrian bridge inspection procedures following a partial collapse in Corktown that plunged a man just steps from the Lodge.

About $1.8 million was spent removing six pedestrian bridges in the same time span. This year, $1.12 million has been spent on repairs.

... The spending data reflects a lack of concern for pedestrian bridges in a city where many people don't have access to a vehicle, Todd Scott, executive director of the Detroit Greenways Coalition, tells Axios.

Based on the data, bridges are seemingly neglected until people stop using them, then torn down, Scott says.

"What they're doing is demolition by neglect. There's enough money. It's a question of priorities."

Two bridges are closed after the collapse prompted MDOT to check of all of the city's poorly rated pedestrian bridges.

They're among approximately 70 that cross freeways in the city. Wayne State University student surveyors found the integrity of nearly half, or 46 percent, appeared compromised during a study conducted in 2015.

"These structures are in operation yet each had observable issues ranging from crumbling and disintegrating concrete to significantly rusted support beams, down signage and missing fencing and railing," a synopsis of the research published by the website Detroitography said.